Modern digital users have the patience level of a typical 5-year-old. Apps that incorporate software testing tools have one core objective to meet: not to make the first encounter with a glitchy UI and unusable functionalities.

Software quality in software engineering is a general expectation business stakeholders have. Unfortunately, testing is also a “sacrifice” for time to market, postponing the release date and rejecting builds last minute in the development process.

This is when testing, automation, and software quality tools are the must-have additions to achieve a consistent level of release confidence and speed. This article covers several different testing types, software quality testing tools, and how they are used together to help teams launch exceptional digital experiences.

Delivering fully working software isn’t as easy as it sounds.

A “Start for Free” button can be one bug away from returning a 404 error page or performing no actions upon click. But “code fast, ship fast,” while still maintaining quality, is an endeavor every client wants. 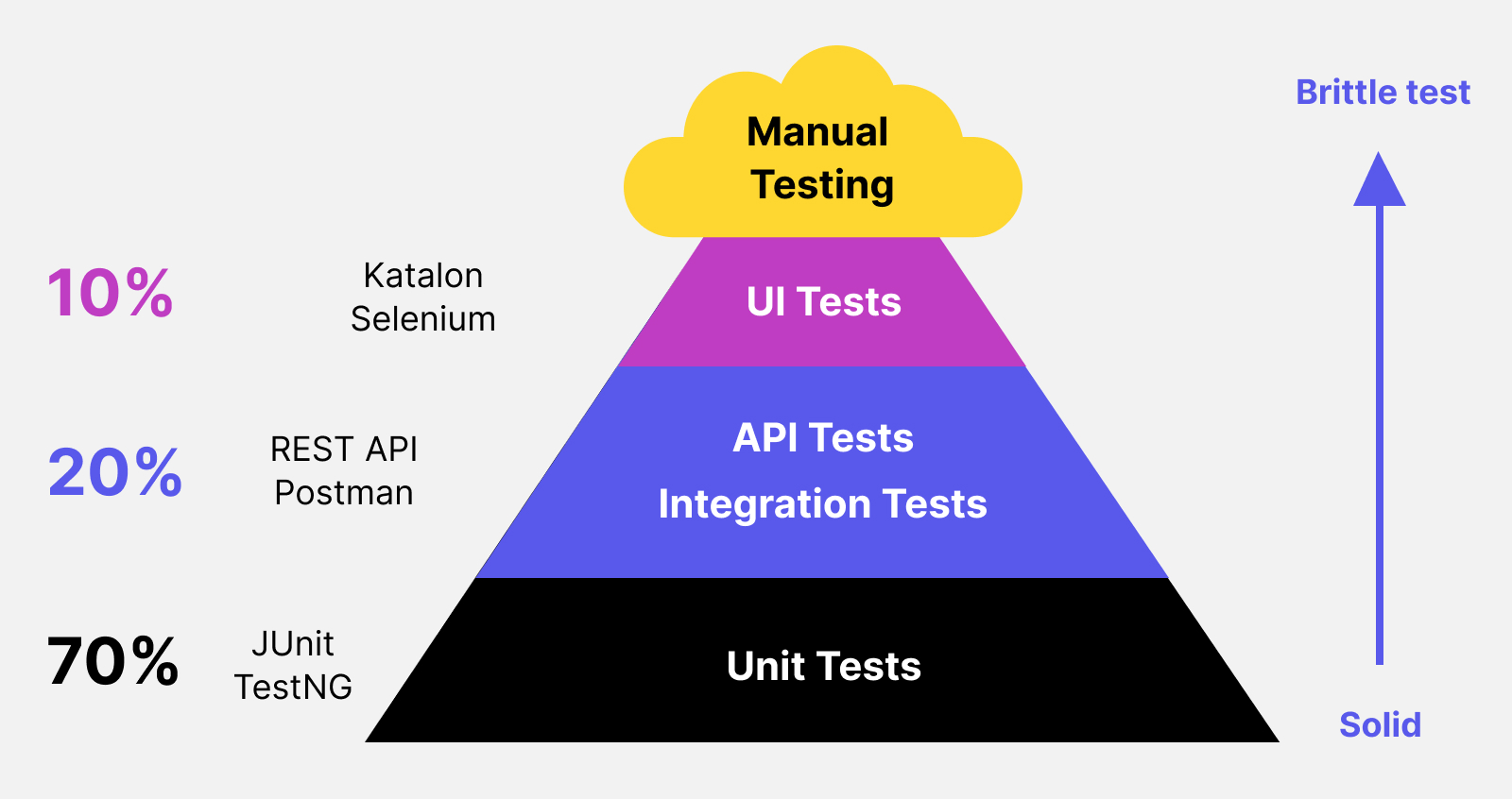 I. Code quality and maintainability

Checking the code without even running it? That’s what static analysis is all about.

Static analysis tools add another layer of quality checks to find things like syntax errors, inconsistent adherence to coding styles or security loopholes in a non-runtime environment. Of course, manually reviewing or peer-reviewing code is an option, but automation is often incorporated for instant and extensive feedback.

As seen from the code snippet above, there’s a red underscore for the fourth line of code. Team A immediately sees this syntax error (int = 5, not 5.5) and seeks additional support for slip-throughs like this. Acting as the “Grammarly” for IDEs, they’ve applied static code analysis to scan through codes from the early stages of coding.

From small to big changes, unit testing is the fastest way to make sure the code is clean and safe to merge. Quick code-level automated tests are run to examine an isolated code section, class, or function from its roughest form. Unit testing software tools come particularly handy when re-testing impacted areas from new commits or refactoring.

Team A has coded a logic that if a valid combination of username and password is input into a login form, users will be directed to a “Create your first project” page.

A login form is a single unit. To quickly test if its underlying code will successfully drive users to the right place, a unit test would report back what needs to be reviewed sooner. If there’s something wrong, say passing non-existent emails, fixing it now would be much easier compared to when newer code is added.

Testing individual code in isolation might not uncover issues relating to dependencies between various parts of an app.

Code-level checks are done – but how will they function when the end-users interact with the app? Application-wide functional testing helps to stop the dreadful worry of broken features.

Quality engineers and developers don’t wait until the UI layer takes shape to start software testing. As the layer that holds all the business logic together, API testing pinpoints faults much earlier between API calls and endpoints.

Team A is testing a sign-up/login form, ensuring that only valid usernames and passwords are recorded in the database. Through an API automated testing tool, the quality engineer:

Soon after, the team finds out that the API/backend logic does not match the original requirements, leading to the exception of passing invalid inputs.

The UI stays true to the saying “dress to impress.”

Visual or UI testing is all about making a good impression on the very first touchpoint. No one wants to keep scrolling through a 2006-looking website where:

Plus, don’t fall for the trap of doing the scan manually. Humans can only do so much.

300 web and mobile pages? Time to give your eyes a break.

Team A has finished building the front end for an e-commerce website.

Functional tests have passed and gone green. Yet when trying to access it on a web and mobile browser, it’s a different story.

On the web version, everything is fine. But on the mobile browser, the price tag or cost of the item is nowhere to be found.

Upon further inspection, the team realizes that the error is due to how the different devices render UI elements.

In other words, that latest payment option you just added might cause the Checkout button to become unclickable. Automating regression testing is actually a common practice due to the fact that code changes happen so often. To prevent both new and old bugs from swirling up the system upon going live, some of the types of regression testing include:

Team A has just finished coding an enhancement for the submit comment section on a blog page. To eliminate false emails, the email verification feature was added.

A code change like this could potentially break nearby functionalities – the “Submit” button for instance. For greater confidence that existing features will remain unaffected, previously run regression tests that have passed are wired up to re-run. The reasoning behind this is that these tests were already written for previous builds, making them the perfect fit to catch regressions in existing areas of the codebase.

Functional requirements always tie to a specific customer journey or a set of actions an end-user would perform via an app’s UI.

Tip: Automated end-to-end tests are innately heavy in test steps, making them the longest in runtime. Katalon’s automated testing IDE allows you to play/run from the most critical test step, skipping through actions like opening browsers or going to the URL to keep your testing time less of a burden.

Replying on user stories to write tests keeps you focused on meeting the expected outcomes.

But what about the unexpected, less conventional cases that might be unearthed?

By removing the formal structure of automated tests, exploratory testing allows quality engineers to creatively test the system-under-test unscripted and find quality issues on-the-fly. That said, exploratory testing is not just randomly clicking here and there. Software testers still have to quickly sketch out what it is that they want to test and discover.

Team A has assigned Joey – a quality engineer – to test a client’s cooking instruction website. Without any pre-written test steps to follow, he has to test a feature that allows users to upload a picture of their final dish onto a shared album. Joey has tested plenty of apps before, so even though no desired outcomes were listed, he has the experience to test for things like:

User acceptance testing differs from exploratory testing by its target audience – the stakeholders and the client.

After the development and testing team have agreed that everything is good to go, it’s now about finding out if stakeholders think the same.

In software projects, a week or less will be fully dedicated to the people that wanted the product in the first place. As these users do not have a quality engineering background, they will go through the app according to instinct. Moreover, user acceptance testing isn’t for finding defects like earlier quality stages. It instead gives a high-level view of the app and helps to determine if everything makes sense as a whole.

User experience can easily be impacted by an app that crashes or a page that takes a lifetime to load. At any given level of load or pressure, performance testing serves the purpose of sustaining maximum functionality and operability of an app.

The following are the common types of performance testing.

Load testing sees if an app takes seconds or an eternity to respond back to user requests. Quality engineers use software load testing tools to simulate a specific workload that mimics the normal and peak number of concurrent users, then measures how much the response time is affected.

Suppose Team A wants to see how their app behaves under traffic spikes for a holiday sale of an e-commerce website. The goal is to determine if 100,000 users rushing to find coupons would result in frustrated users staring at a spinning loading icon for over 3 minutes to make a payment.

Stress testing pushes a software or app beyond its limits.

Whatever the average load of a system is, stress testing takes it a step further. Beyond the reliable state, software must be stress-tested for its breaking point(s) and corresponding remedies.

Team A is managing a web-based application for college course enrollment. Usually, when courses open for selection every semester, there are roughly 150 concurrent users standing by when the time hits. In case the number of sessions reaches 170, the system would remain stable or recover quickly if it crashes.

In everyday English, “soak” means submerging something into a matter, such as dipping stained t-shirts into a pool of detergent. In the spheres of software quality, soak testing lets the system-under-test endure a specific workload, for a specific period of time.

Whether it’s hours or days, Team A now inspects the issues that go on after a continuous and extended runtime. To not let test suites get in the way of development activities, the quality engineering team schedules soak tests to run overnight or during the weekends. The results? A memory leak was spotted. 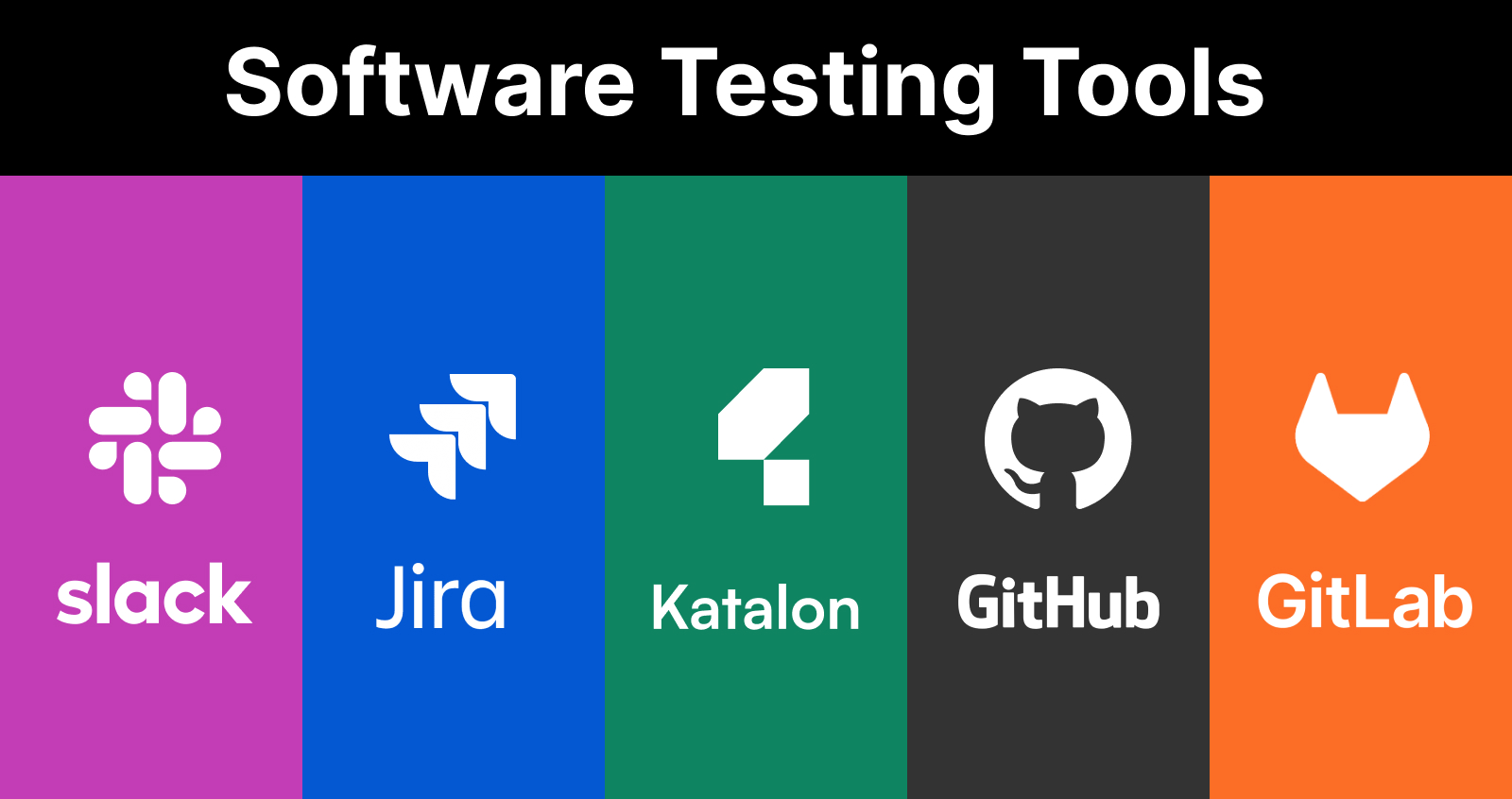 While the investment in automated software testing tools has proven clear-cut ROI, identifying the right candidates, scenarios and strategies to automate require teams to know the difference between manual and automated testing.

Manual testing is done by writing out test steps on some type of text editor, making manual testing tools and test management tools similar. The actions and procedures outlined are performed through interacting with an app's UI using one of these tools below:

Automated testing can be done in one or two ways: using a testing framework, or vendor testing solutions.

A testing framework is built using open-source libraries. It provides users with the ability to code and customize their own quality management engine to test applications.

Testing solutions are pre-built by a vendor and equipped with the testing essentials to plan, author, organize, execute and analyze. Automated software testing tool vendors commonly offer individual tools, a complete platform, or a mix. If a team is only testing a specific system-under-test or area, say web APIs, then single tools are preferred. A testing or software quality management platform is used more in instances where applications are interconnected and demand cross-compatibility between a multitude of application types.

The best bug tracking tools are those that let teams trace back defects to their original user story, requirements, and tests. Throughout the development process, developers and the entire software team can track the remaining defects, prioritize/de-prioritize them and assign them to a designated member to resolve.

Automated testing is the key enabler for continuous integration and continuous deployment (CI/CD). For developers, software quality engineers and the rest of the team to have the confidence to release iterations frequently, testing needs to constantly happen. Given that automated testing sits at the core of CI/CD, integration with testing frameworks and tools is a must.

Messaging platforms in Agile development needs to be more than a day-to-day chat room. The entire team needs communicate and stay in sync at all stages of the software development process. Especially during times where hybrid working modes have become prevalent, communication across the engineering department needs to be solid. Tool suites including CI tools, testing platforms and the rest of the engineering techstack needs to be connected and provide instant quality feedback. 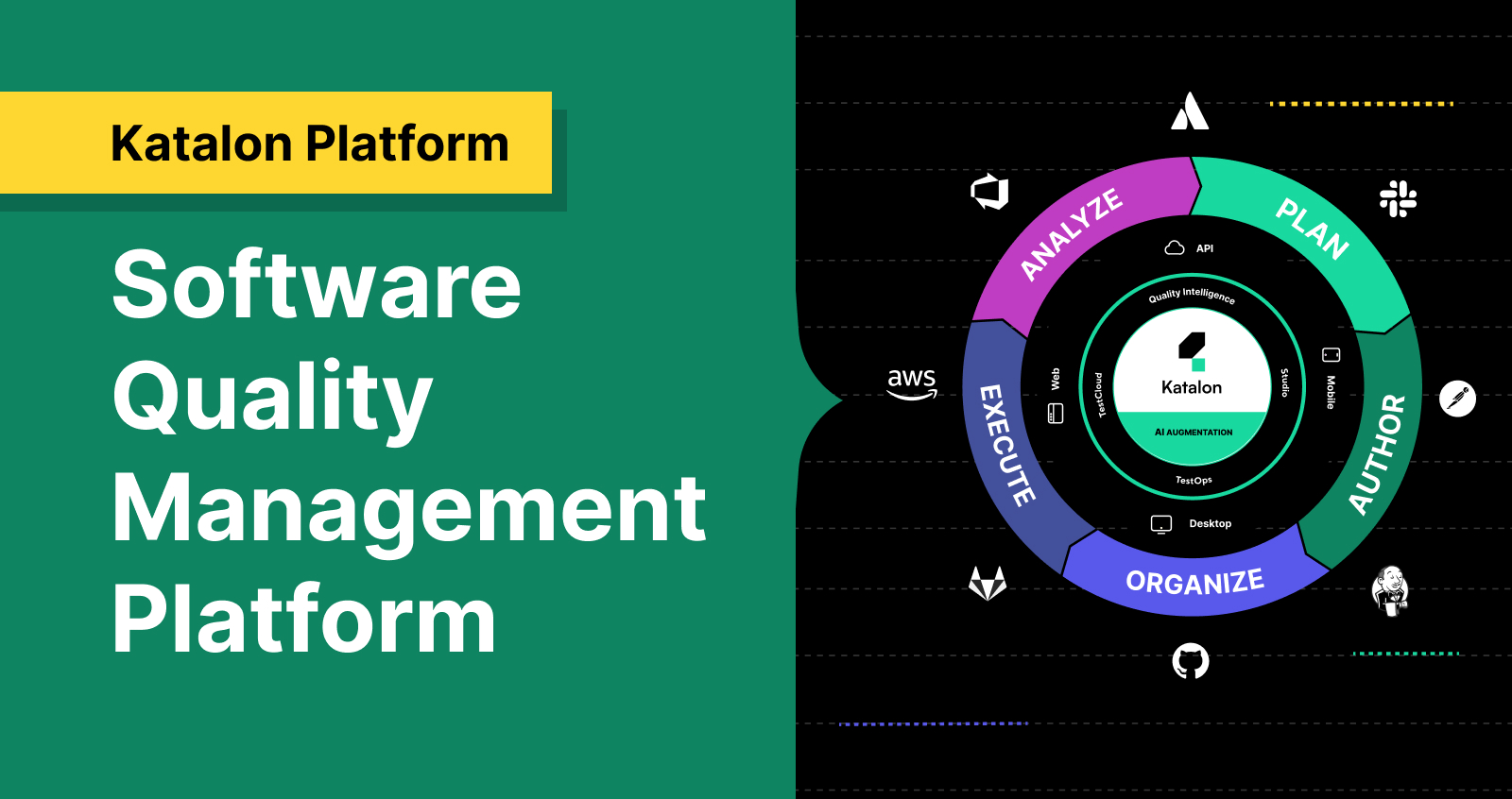 How software quality platforms outrank single-point solutions
The Selenium alternative
that makes a difference.
Get Started View Demo
Click
×
Contact Us
Want to see a custom demo or get help finding the right plan?
We'd love to chat. Please fill out the form and we'll be in touch soon.