Toward an Autonomous Software Testing Benchmark

We figured the industry shift from Test Automation to AUST could either be messy — a sort of Wild West approach to product maturation — or goal-driven, something to which the entire Software Testing community could aspire in a spirit of cooperation. That's where self-driven cars — or autonomous vehicles, as the mobility industry likes to call them — come in.

The measured advances in autonomous vehicles have inspired us to assemble a way to benchmark progress toward autonomy in the software testing domain. We call the benchmark the Autonomous Software Testing Model (ASTM).

We wanted a way to gauge just where software testing platforms are in their development of "self-driving" software testing — Katalon included. We looked to the Society of Automotive Engineers for guidance on building an ASTM benchmark.

The benchmark for the maturation of autonomous vehicles that the Society of Automotive Engineers (SAE) created observes that humans will be involved in the evolution of the technology as a matter of course. In other words, autonomous vehicles will not suddenly pop out of a black box overnight. Instead, humans will be involved with developing, training, and testing the technology for some time to come.

The human performs all activities and actions and makes all decisions concerning testing of the System Under Testing (SUT).

The human performs most actions for testing the SUT with the support of the computer, e.g., automated software tools. The computer carries out certain testing actions automatically under the human’s control. The human holds the main role and makes all testing decisions.

The computer generates a list of decision options, selects an option, and performs actions based on this option if the human approves. The human can also select another decision option for the computer to carry out.

The computer generates decision options, determines the best option, and performs testing actions according to this option. The human can still intervene if necessary.

The computer has full control of the testing process for the SUT, including making decisions and carrying out all testing actions. The human cannot intervene.

We applied the ASTM benchmark to Katalon.  We scored the Katalon functionality on a spider diagram to gauge the degree to which Katalon has evolved its autonomous features. 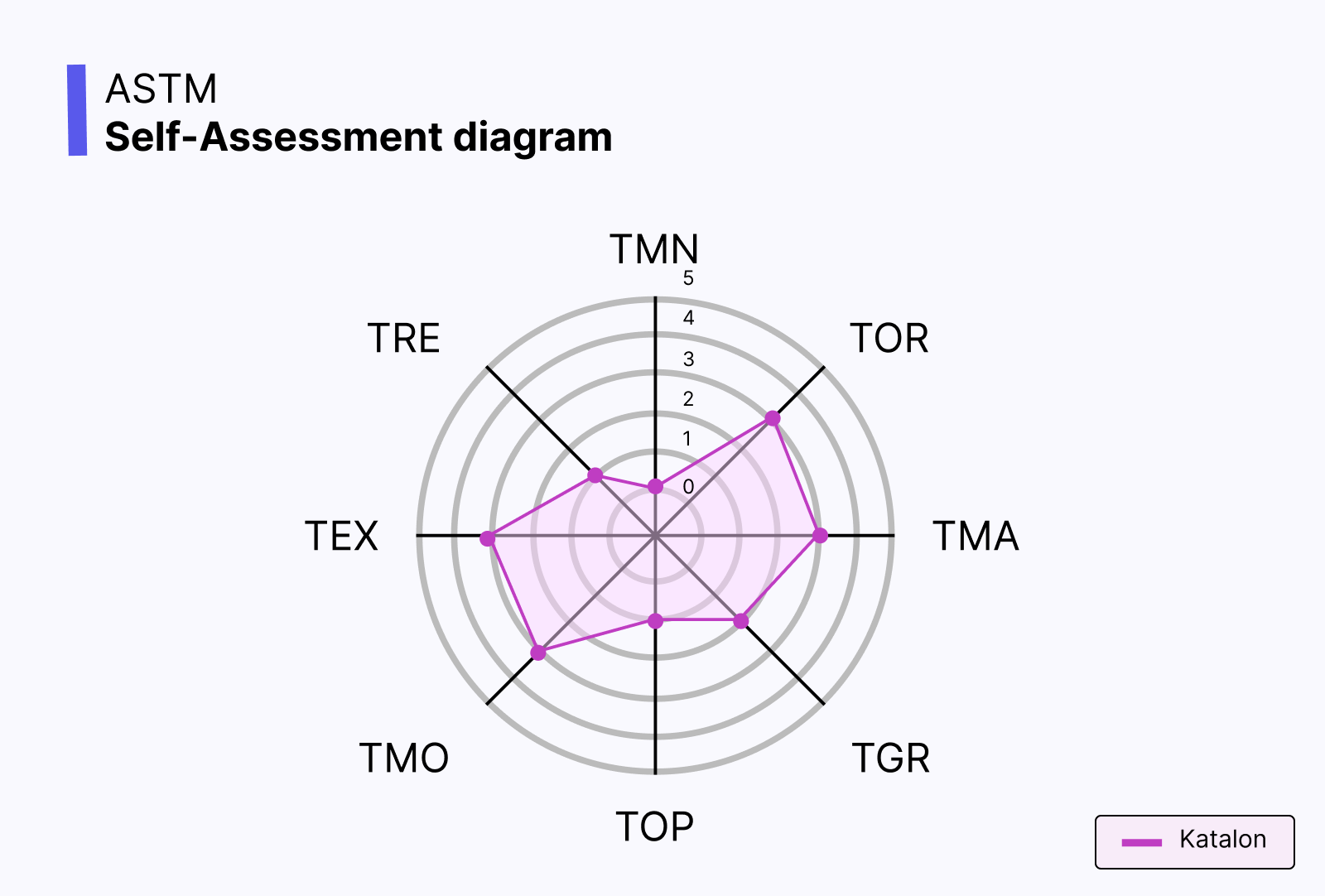 In particular, Katalon rates 3rd-level autonomous activity in the areas of Test Orchestration (TOR), Test Maintenance (TMA), Test Monitoring (TMO), and Test Execution (TEX). The benchmark implies that while the Katalon Platform can generate a list of decision-testing options for these activities, the system still requires human approval to act on the options; or, instead, the human can select another decision option for Katalon to act on.

If you are a Katalon user, where would you place our platform's levels of autonomy?

If you would like to learn more about how Katalon's AI-powered capabilities can: